How did this sleepy country neighborhood event become the second largest scale trail event in the US of A and the largest TTC event?

To have met Mike Kirby of Team KNK Hardware, it’s easy to understand. He is pure enthusiasm with a whole lot of spice add-on’s like; big hearted, compassionate and driven! And he is doing it all for the right reasons, to bring awareness and grow his segment of choice in the hobby industry. He knows that in order for his company to succeed, he needs the upper end of the food chain to succeed and he is going to great length’s in order to do so. On top of it all, he is going about it the long hard way; do events, promote the activity, hope people come, have fun, tell friends, purchase vehicles, get more involved, want to build, need screws to build with, thus purchase KNK Hardware. That is serious long term investment and commitment. For Kirby, it’s just hard work for something he believes in building on his 35+ years of being an R/C enthusiast!

While we all love our fun trail runs, events are simply the best way to effect change and awareness on a more grand scale. Events brings the potential added bonus of more exposure. Events potentially bring a larger group of people together and result into “communities” that share a common bond that naturally wants to grow and share the fun.

Scale trail runs by nature are very organic, held outside of the common driver stand / designated purpose built courses. But Mike wanted to bring a bit of that back into the scale trail segment because, while the grandiose trails of AXIALFEST are just that, they are not permanent, not easily accessible, only held once a year and 3,000 miles away from Kirby’s backyard!

Mike has his own ideas and wanted to transform his backyard into the ultimate playground for scale trail enthusiast in his area. Kirby’s vision was a bit more than most, he wanted something more permanent, something he could keep building upon. At the same time, his playground is something of a testing ground as he knows very well from his racing days, it’s all about steering wheel time VS just purchasing the latest greatest perceived performance advantage.

In June 7-10 of 2015, just after two in business, Mike and Amberly Kirby held their first event on their 14-acre property, to include camping space and their idea of what they wanted to see in a scale trail Tough Truck Challenge facility.

What sets Kirby’s course apart from the rest is his layout of the trails with separate or detached groomed walking area’s that are wheel chair accessible, kid and family friendly.

With all this attention to detail for the enthusiast, Mike knows the number one issue with competition based scale trail events is looking after the trail itself.

It’s one thing to have natural trail degradation due to a 10lbs vehicle throttle jockeying up the rocks, shuffling the deck with 4600Kv on 6S, that’s motorsports! (insert Dan Wilson’s motto “power solves everything, just add more!”)

But add a foot print or bumped rock by a 100+ pound individual and a trail could be blown! The scale gods would frown as no proof has been made to big foots actual existence (debatable, but for all intended purposes). If such happened in the middle of a competition, it would change everything and it has happened.

Kirby saw the separation of driver and rig simply as the only solution to provide the best competitive platform possible, thus the KNK Farm with its unique features was constructed and continues development. Like when his son, Gavin age 7, says “Dad, let’s make this bridge that walks up and around and back down the tree!” Kirby obliges, keeping the whole family involved.

While the competitive spirit runs very strong within Mike’s DNA, Kirby also knows the offroad enthusiast is very community driven and that aligns well with Mike’s super family friendly environment. We are in his backyard, we are his guest, so it’s his rules, his family’s playground we’ve been invited over to play on his playground. It’s not a race track, it’s not a park, it’s Mike and Amberly Kirby’s personal backyard.

Come as guest, leave as friends, but help clean up after ourselves so we can continue the greatest family gatherings east of the Mississippi!

CLICK The Picture Below To Scroll Through The Event Photo Gallery: 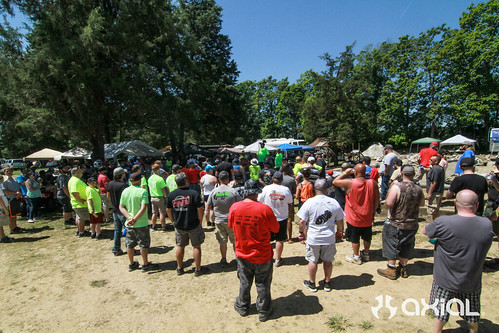